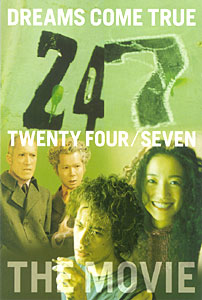 A special movie based on the single of the same name.

The video is cool, but the movie is strange, strange, strange. I considered describing what I thought it was about, but with my limited Japanese, I’m still not 100% sure what exactly is going on; So take the following with a grain of salt. Basically, it has a relationship gone wrong (with Miwa as the hurt party), Masa and Taka as “agents from the virtual world” (they look like they’re part of a painting) giving warnings about what’s to come, and there’s a special 24/7 room where things seem to go right.