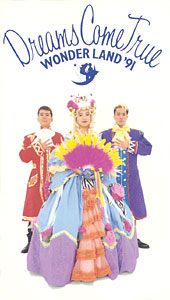 The beginning of the whole Wonderland concert mania. It features songs from the group’s first four albums, tho mostly from the first three. Wild costumes, great music and the power of Miwa. A good sign of things to come. ^_^

The ‘Walkin’ on the DCT Road has the band walking around town and gathering fans behind them with every step, on their way to the concert venue.